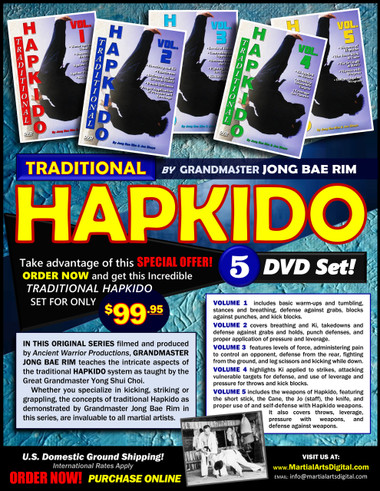 This five-part Traditional Hapkido DVD series features Grandmaster Jong Bae Rim and instructor Joe Sheya teaching powerful and effective techniques from the Korean martial art. Grandmaster Jong Bae Rim is a direct disciple of Hapkido founder, Yong Shul Choi. In this original series filmed and produced by “Ancient Warrior Productions”, he teaches the intricate aspects of the traditional Hapkido system as taught by the Great Yong Shui Choi. Whether you specialize in kicking, striking or grappling, the concepts of traditional Hapkido as demonstrated by GM Jong Bae Rim in this series, are invaluable to all martial artists.

Volume 2covers breathing and Ki, takedowns and defense against grabs and holds, punch defenses, and proper application of pressure and leverage.

Volume 3features levels of force, administering pain to control an opponent, defense from the rear, fighting from the ground, and leg scissors and kicking while down.

Volume 4highlights Ki applied to strikes, attacking vulnerable targets for defense, and use of leverage and pressure for throws and kick blocks.

Volume 5includes the weapons of Hapkido, featuring the short stick, the Cane, the Jo (staff), the knife, and proper use of and self-defense with Hapkido weapons. It also covers throws, leverage, pressure with weapons, and defense against weapons.