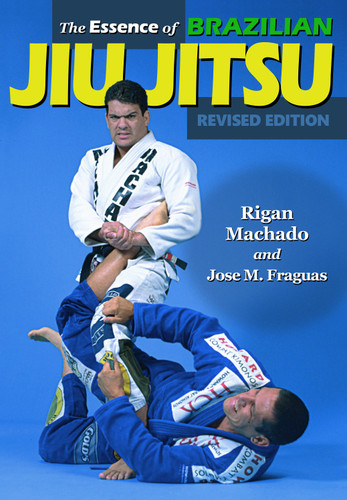 The effectiveness of Jiu-Jitsu in real fights came into prominence in the early 90's when jiu-jitsu expert Royce Gracie won the “Ultimate Fighting Championships fighting” against much larger opponents. This book is a must for all martial artists regardless of their style. This Revised Edition of the title encompasses an enormous variety of techniques, including arm locks, chokes and leg locks. With more than 700 photos and a clear and descriptive narrative, The Essence of Brazilian Jiu-Jitsu is one of the classic books about this martial art system.

Rigan Machado is an 8th degree black belt in Brazilian Jiu Jitsu. He is a former Jiu Jitsu world champion and a veteran of the ADCC. Professor Machado began competing at the world championship level at the age of 14, and won his first Brazilian National Championship in the yellow belt division. He amassed a record of 365 wins and no losses in Brazilian Jiu Jitsu competition. He also created a record by having 19 matches in one day and finishing all of them by submission. He also has competed and won in other styles of grappling, such as Judo and Sambo, in which he took second place in the World Championships. Rigan is considered as one of the greatest Brazilian Jiu Jitsu teachers in the world.

Jose M. Fraguas is regarded as one of the world’s top leading authorities and writers in Martial Arts. His pioneering work in the field has inspired others to follow but only a few in history, have successfully brought such a drive and scholarship to their work around the world. Fraguas has practiced, taught and written on Martial Arts for over 45 years. As former professional athlete and Strength and Conditioning training specialist, his desire is to integrate Martial Arts philosophy, training and values into everyday life. Originally from Madrid, Spain, he currently resides in Los Angeles, California.